Our experts will get back to you as soon as they can.
Repair Instructions: Submitted by Customers Like You
15 of 18 people found this instruction helpful
Tool Type:
Trimmer
Parts Used:
Spring and Container - 638033001
Starter Pulley Assembly - 308386001
Repair Difficulty:
Easy
Time Spent Repairing:
Less than 15 minutes
Tools Used:
, Screwdriver w/star bit
String wouldn't recoil after pulling it !
I just simply removed the starter pulley, spring and container and replace it, it works like new now !
Did you find this story helpful?
Thanks for voting and helping fellow customers!
6 of 8 people found this instruction helpful
Tool Type:
Chain Saw
Parts Used:
Spring and Container - 638033001
Drum And Connector - 308177001
Repair Difficulty:
Hard
Time Spent Repairing:
More than 2 hours
Tools Used:
Screwdriver, Pliers, Socket set, Wrench Set, Nutdriver, Torx head drivers
Starter cord handle broke and retracted.
First I would like to thank Mark and all his useful videos, without which I would have never been able to do this. His videos provided clear procedures that were easy to follow, and he puts on a better, more professional video with each new one he produces.
There are differences between the BC30 that I have and the SS30 in the video, so I would like to take this opportunity to go over the differences with anyone else who has this model.
1. The clutch drum takes a T20 Torx head driver, not a T25 used in the video, but the rest of the fasteners are T25.
2. The starter spring goes face down against the plastic ribs with the metal cover covering it, so the spring is not visible other than its center tab showing through the hole in the cover plate. The part is shown this way in the parts lists, too. Then you can set the 6-7 turn preload in a clockwise (vice a clockwise) fashion, attach your starter cord, and the cord will retract properly (counter clockwise). For this part it's a definitely good to have a helper when tying the cord, I'm just not good at one handed tying like Mark.
3. Mine uses the two clutch plates, too. Put the first one on in a reverse shape like Mark does, and the second in a normal. This way the two clutch plate surfaces with the small dimple will be facing each other. The dimples don't have to exactly face each other, just the surfaces, so even if the dimples are 180 off it's still ok.
4. I use mine as a pole saw and have several other Expand-it attachments, so make sure the clutch drum engages properly with the drive pin inside the pole and doesn't get positioned off center.
5. If your trimmer won't start, try reversing the electrical leads to the cutoff switch, they are not marked. The right way it will start (eventually), the wrong way it will never start.

Also replaced the fuel tank the lines were cracking and sucking air, making priming impossible. The tank comes with the lines pre attached and Mark has a useful video on this, too. Also cleaned the carburetor with carburetor cleaner and cleaned the sponge style air filter. Now it runs and drives the saw again!

Did you find this story helpful?
Thanks for voting and helping fellow customers!
Tool Type:
Pruner
Parts Used:
Spring and Container - 638033001
Repair Difficulty:
Medium
Time Spent Repairing:
30-60 minutes
Tools Used:
Screwdriver, Pliers, Wrench Set
Starter recoil spring failed
1. Watched e Replacement video (you Tube) of starter assembly replacement procedure for same Ryobi powerhead as my pole saw.
2. Followed the steps as shown and ended up with a starter that worked backwards. It spun the motor as it recoiled the rope into the housing.
3. Quickly determined that the spring installation in the video is backwards, the coiled spring should not be visible- the spring casing should face out.
4. Reassembled and pole saw started on the first pull.


Did you find this story helpful?
Thanks for voting and helping fellow customers!
Tool Type:
Trimmer
Parts Used:
Clutch Assembly - 300960002
Spring and Container - 638033001
Washer - PS05268
Easy Starter Assembly - 310022003
Starter Baffle - 518994001
Repair Difficulty:
Medium
Time Spent Repairing:
1-2 hours
Tools Used:
Screwdriver, Pliers, Wrench Set, Nutdriver
Starter assembly melted
Used parts diagram from this site.
Main trick was a clutch removal from the shaft.
I didn't realize that a clutch is threaded to the shaft and broke it during removal.
New clutch from this site actually shows an arrow that indicates a direction of rotation for a clutch to be removed. Original clutch didn't have that. 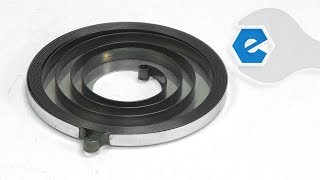