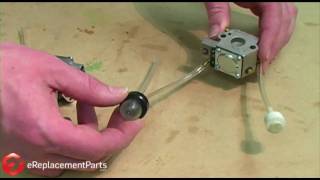 How to Replace Fuel Lines on 2-Cycle Engines

Finish Nailer Repair - Replacing the Driver Guide (Ridgid Part # 79004001022)
Fuel lines need to come off of a carburetor for a number of repairs and maintenance procedures, and it's easy to mix up the routing of the fuel lines after removing them.

For 2-cycle engines, there are two major carburetor designs worth discussing, each with a different fuel routing orientation:

We explain the steps to determine the correct fuel line routing below for both types of 2-cycle engine carburetors. To get started with your repair, find replacement fuel lines for your engine by typing its model number in the model number search field at the top of this page.

Fuel Line Routing for "Local Primer" 2-Cycle Engine Carburetors
It is a common problem to forget the orientation of fuel lines after removing them, especially since manufacturers generally do not mark which is the incoming and outgoing fuel ports on their carburetors. "Local primer" carburetor designs look like the carburetor pictured below.

With correct fuel line installation, fuel is pulled in through the line with the fuel filter and pushed out out the unfiltered return line. After mixing up the fuel line orientation, performing a test is the only way to make sure that the lines are installed correctly. [Back to top]


1. Install the lines and test the orientation.


Make a guess and install the lines on the carburetor.

Test the orientation of the fuel lines by placing the ends of both lines in 2-cycle fuel (never water) and then prime the bulb.

2. Reverse the lines and perform the test again (if needed).

In the event that bubbles emerge from the fuel filter during the test, reverse the lines and perform the test again.

Bubbles out the unfiltered return line verify that the new fuel line placement is correct.

Fuel Line Routing for "Remote Primer" 2-Cycle Engine Carburetors In the carburetor design pictured below, the primer assembly is separate from the body of the carburetor.

Fuel only flows one way through primer assemblies.

So, the first step in determining the overall fuel line routing in this type of carburetor is to determine which are the input and output sides of the primer.

Attach fuel lines to the primer assembly, submerge both lines in some 2-cycle fuel, and prime the bulb.

Bubbles will emerge from the fuel line attached to the outgoing side of the primer--the return line--meaning that fuel is being pulled through the line that is not producing bubbles.

The line not producing bubbles is the one that must be attached to the carburetor, since fuel must be pulled through the carburetor and into the primer bulb. [Back to top]
2. Test the fuel line routing with the carburetor.

Attach the incoming line on the primer assembly to one of the ports on the carburetor and attach a third fuel line to the other carburetor fuel line port.

Submerge the ends of both fuel lines in some 2-cycle fuel and test the line configuration by depressing the primer bulb.

[Back to top]   3. Reverse the lines and perform the test again (if needed).


If the primer bulb sticks or returns slowly in the first test, switch the positions of the fuel lines on the carburetor and perform the test again.

Start your fuel line repair by viewing the parts page for your gas equipment product. Enter your product's model number in the search field at the top of this page, or visit use the part finder on our website's Home Page.
[Back to top] What we're about.