Find Official Snowblower Parts that Fit
Finish Nailer Repair - Replacing the Driver Guide (Ridgid Part # 79004001022)
Snowblowers of all kinds are made for decades-long service when maintained and cared for correctly. Owners of snowblowers should give their machines periodic checks and tune-ups (like with other gas powered equipment), but it doesn't quite end there.

Owners should also expect to replace certain parts over the course of their snowblower's life, parts specific to snowblowers that are designed for wear and eventual replacement. This article discusses how to care for and maintain snowblowers, how to prevent unnecessary wear to expensive snowblower parts, and what to look for when its time to replace those less expensive, wear-prone parts.   Snowblower Safety Tips
Although this is article is not strictly about safety, it would be irresponsible not to mention this one major snowblower safety concern. Snowblower discharge chutes can become clogged with snow during operation, often tempting users to use their hands to unclog the chute. Here's the tip:

Putting a hand into a snowblower chute can easily result in amputated fingers getting thrown out of that same chute by the same impeller that cut them off. 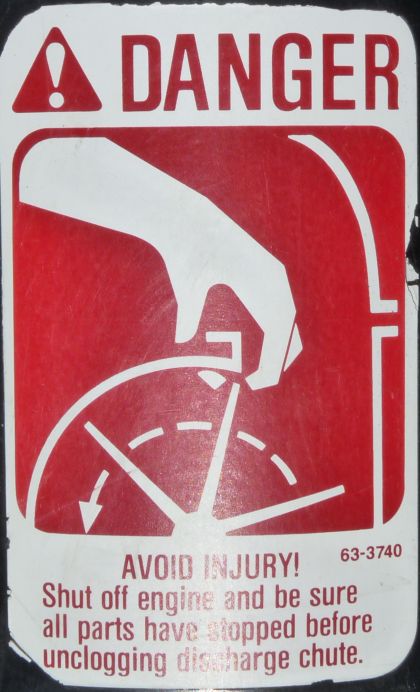 This is especially dangerous with two-stage snowblowers, since most two-stage snowblower impellers are always spinning, even when at idle. The impellers of single stage machines may not spin at idle, normally, but it would only take the tiniest of mechanical slips for that impeller to engage itself and eat a hand for dinner. We recommend against using hands to clear discharge chutes even if the snowblower is completely turned off, because it's just a terrible habit to reinforce. Many snowblowers come with some kind of breaker bar for clearing jammed chutes. If one isn't available, a broom handle or some other object can be used. Snowblowers should still be turned completely off before clearing their chutes in this way. Here's the other tip:

[Back to top]   Gas Engine Service Although some electric models are available, most snowblowers are gas powered, and should have their engines tuned and checked periodically just like other gasoline machines. 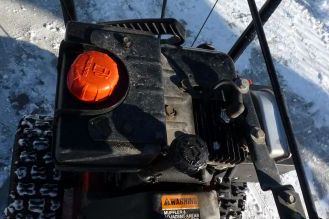 Engine service should include:

Filter cleaning/replacement, spark plug changes, cylinder lubrication, and fuel storage are seasonal maintenance items usually performed once per year. Even though parts like spark plugs don't have to be changed every year, it's not a bad idea to do since they are inexpensive, easy to switch out, and it's better to get in the habit of doing it with other end-of-season maintenance. The remainder of snowblower maintenance and parts replacement issues discussed in this article deal with non-engine parts that are specific to snowblowers. [Back to top]   Single Stage Snowblowers and Parts Replacement
All snowblowers work by propelling themselves, cutting up the snow beneath them, lifting that snow, and then forcefully ejecting it. Single stage snowblowers do all of this in one smooth mechanical motion. They do not have separate augers (for cutting) and impellers (for lifting) like two-stage snowblowers. Instead, single stage snowblowers do both jobs by cutting and throwing the snow all at once with their specially-shaped cutting impellers. Single stage impellers are sometimes called "paddles," and they are also responsible for propelling the snowblower as they dig into the snow. Generally, single stage snowblowers are designed to efficiently handle snow clearing up to 12" deep.   Single Stage Wear Parts There are only two major wear parts for single stage snowblowers, but they can last for many years despite the fact that they are designed for replacement. As discussed further below, replacing these parts on schedule reduces the risk of damaging more expensive parts during operation.

Most single stage impellers are made of (or covered with) some type of hard plastic or rubber that wears width-wise over time from friction associated with normal use.

Check the snowblower's paddle a couple of times each season just to be sure it's not ready for replacement. An impeller should be replaced after it has worn somewhere between 3/8" and 1/2" along its width from its original width. 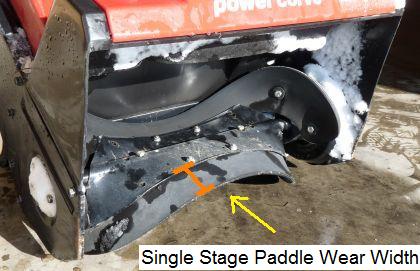 One easy way to diagnose a bad impeller is by any changes in how far the machine throws snow. If a snowblower suddenly ejects snow at a shorter distance than it used to, chances are that the impeller has gone bad.

Both kinds of snowblowers have scrapers somewhere behind their cutting ends that help to accumulate snow in the auger/impeller housing.

Like impellers, scrapers will gradually suffer from wear with normal use and should be replaced. 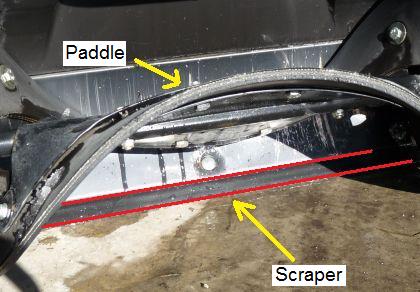 The thickness of scrapers will wear down as they grind against the ground and/or snow, so users can look for thinning. Scrapers often wear in curved patters as well, especially when a snowblower is used to clear snow on a slanted or contoured area.


Scrapers on single stage snowblowers are usually made of nylon or some kind of hard, black plastic. Conveniently, snowblower impellers and scrapers tend to require replacement at about the same time.
[Back to top]   Two-Stage Snowblowers and Parts Replacement Two-stage snowblowers are generally larger than single stage units, and they also split up the jobs of propelling, cutting, and throwing snow between separate parts. Most benefit from independent tire drive powered by their motors. Cutting is accomplished by a number of metal, spiral shaped auger blades that chop the snow up and lift it to the machine's impeller. The impeller fan is separate from the auger blades, and works to eject the chopped snow out the discharge chute. Although impeller and scraper wear is also a concern for two-stage units, these larger snowblowers have a couple of additional wear parts that require attention and replacement. Two-stage snowblowers are generally built to efficiently handle snow clearing up to about two feet deep.
Two-Stage Wear Parts Replacing snowblower parts on schedule will do more than ensure good machine performance, it will prevent more expensive parts from being damaged. It's much better to throw on some new skid shoes or a fresh scraper than having to replace expensive auger blades or an entire auger housing. 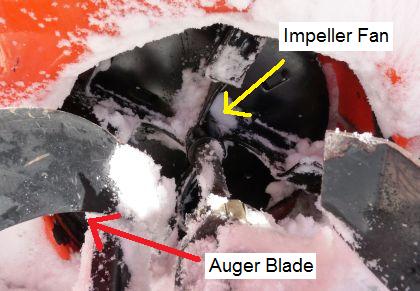 However, two-stage impellers can still see wear over the years and stop throwing that snow as far as they used to, so it's best to check them occasionally.

Two-stage snowblower scrapers are usually made from steel, but they will eventually encounter the same kind of wear that single stage scrapers see.

Look for significant reduction in the scraper's overall thickness (comparing to its original thickness), and also check for curved wearing patterns.

Two-stage snowblower impellers and augers are partially held in place by little bolts called shear pins. These pins are actually designed to break under the strain of a specific level of torque, such as when something jams up the turning auger blades.

When a snowblower shear pin breaks because of some obstruction in the working end of the machine, the auger blades stop turning and the much more expensive engine gears are saved from demolishing themselves under their own power. 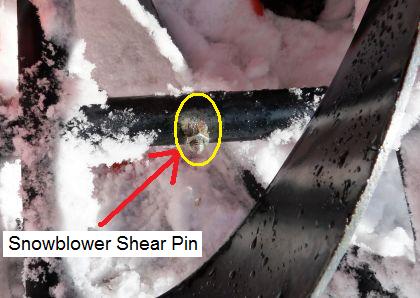 Most two-stage snowblower owners will experience a shear pin break in the course of their machine's life.

It is extremely important that snowblower shear pins be replaced with Original Equipment Manufacturer (O.E.M.) parts. These pins must be perfectly engineered to match the torque breaking level specific to each snowblower in order to work correctly.

One of the worst things that could happen to a snowblower during operation would be for the spinning auger blades or the housing to contact cement or asphalt.

Because two-stage snowblowers do not rely on their auger blades to pull the machine, they have additional parts mounted on the sides of the the auger housing that lift the housing and the auger blades off of the ground at various settings. These parts are called skid shoes. 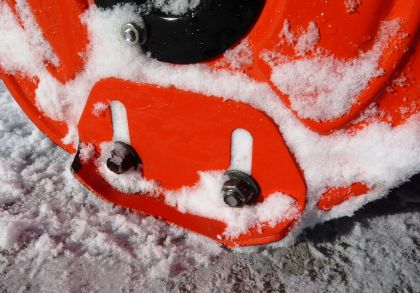 The idea is that since something has to take the brunt of all that ground friction, it might as well a less expensive part like skid shoes that can be easily replaced.

If skid shoes are allowed to wear all the way down, then snowblower owners are looking at some very expensive auger blade and/or housing replacements in the near future.

The best thing to do is to keep an eye on skid shoe wear by checking them with each blower use. Most skid shoes will have some kind of protruding flange on their bottoms. If the flange is gone, then you know that a skid shoe replacement is far past due.

Unfortunately, it is not uncommon for users to neglect these parts until they have worn all the way down to the screw holes where they attach to the housing, in which case, the entire housing must be replaced. [Back to top]   Preventing Heavy Wear to Snowblower Parts Preventing damage to a snowblower's more expensive parts mostly just involves correctly replacing the wear parts already discussed in this article. Fresh scrapers and skids, for example, will keep the machine's augers and housing off of the ground where they're sure to get shredded. 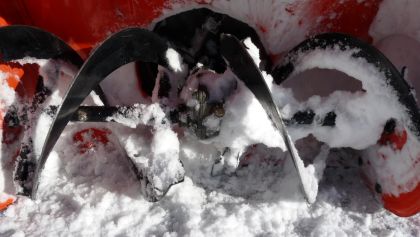 Here's the short list of wear and damage prevention tips:

[Back to top]   Conclusion These snowblower maintenance tips and guidelines cover the most important parts and services that snowblower owners need to know to keep their machines clearing ground. Scrapers, impellers, filters, and spark plugs, skid shoes, shear pins, and engine parts--our warehouse here at eReplacementParts.com is stocked with genuine Snowblower Parts for Bolens, MTD, Murray, Ryobi, and Yard Machines snowblowers. With the highest quality components and information at their disposal, our customers can keep their machines and power tools, like snowblowers, shoveling out performance. [Back to top] What we're about.
SHOP FOR SNOWBLOWER PARTS
Need snowblower parts? We'd love to help you find the one you need.
Shop our wide selection of Snowblower Parts straight from the manufacturer and we will have the right fit to you in no time.