Our experts will get back to you as soon as they can.
Repair Instructions: Submitted by Customers Like You
8 of 9 people found this instruction helpful
Tool Type:
Outdoor Grill
Parts Used:
Valve/Regulator Assy. LP, Q2000 2014 - 64865
Repair Difficulty:
Easy
Time Spent Repairing:
Less than 15 minutes
Tools Used:
Screwdriver, Pliers
The new regulator worked and per the original. The old regulator did not allow a good flow of propane.s it should a
1. Removed burner unit.
2. Removed old regulator, replaced.
3. Reinstalled burner unit.

**Make sure you disconnect the propane tank before swapping out the assembly.**

Take a photo of the whole assembly and note how it sits on the underside of the BBQ.
It might be useful during reassembly.

First I pulled off the valve knob. No screws on this one, just gingerly pull it off and place it to the side.
Next I loosened the brass nut that sets the valve on the plastic housing with my small adjustable wrench. If you loose it, the replacement assembly comes with a new one, so don't sweat it.
Next I loosened the two small phillips head screws that keep the plastic valve housing connected to the underside of the BBQ. Be careful not to loose those screws. You don't get extras and they are pretty small.
At this point the the plastic housing and valve assembly will basically collapse. Make note of how the assembly is seated under the BBQ. Its a little tricky, but since you have already taken a photo, should be easy to reassemble.
Remove old assembly and replace it with the new one.
Don't forget to remove the brass nut off of the valve prior to reassembling.
Hardest part for me was putting the plastic valve housing screws back in. I needed a little extra light to find the holes. You may need to use a short and long phillips screwdriver to accomplish this. It's a little awkward.

Once reassembled, reconnect the propane tank. I use soapy water in a spray bottle to check the valves and connections for leaks. You will notice a leak when the soapy water forms a large bubble. No bubble=no leak. If there IS a leak, and it's at your connection, then reconnect. If its in the new valve assembly itself, send it back, although if there would be a problem, it would most likely be in the connection and not the new valve assembly.

Please note, the directions that come with the assembly cover a larger repair, so it may complicate things, as they have you removing more items than necessary to do this particular task.

I have used eReplacement parts to buy parts to repair my washing machine, dryer, BBQ and lots of other item. Without fail, they have had everything I needed and were very prompt, for which they get a giant "thumbs up" from me.

Time to grill some steaks!


Did you find this story helpful?
Thanks for voting and helping fellow customers!
Product Information
Repair Guides 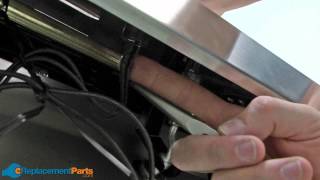