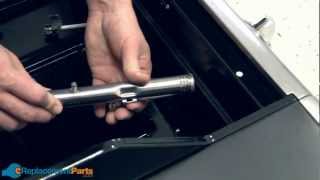 Quick Fix: How to Replace the Burners on a Char-Broil Tru-Infrared Gas Grill

Check out our Char-Broil replacement parts section to keep your gas grill cookin' like new.
Replacing the burners:

1. Remove the grilling grates and the fire box trough

Pull the grilling grates off of the grill and set them aside.

With the grates removed you will now pull out the fire box trough.

2. Remove the hitch pins and the carry-over tube

Use a pair of needle-nose pliers to pull the four hitch pins out of the burners.

3. Remove the burners from the grill

Lift the burners out of the grill and use a flat-head screwdriver to separate the ignition electrode from the burners.

4. Install the new burners into the grill

Clip the electrode onto the new burner and insert the end of the burner onto the nozzle of the valve assembly. Repeat this step for the other burner.

5. Replace the carry-over tube and the hitch pins

Replace the carry-over tube on the new burners and replace the four hitch pins.

6. Replace the fire box trough and the grilling grates

Set the fire box trough and grilling grates back into their original location.

[Back to Top]
Conclusion: That's how fast and easy replacing the burner on your Char-Broil will be.  Now get out the steaks and fire up your grill.
Don't forget to visit our grill parts page see what we carry for your model.
[Back to Top] What We're About