Repair Center  Tool Diagnosis: Is it the Brushes or the Switch?
Safety

Tool Diagnosis: Is it the Brushes or the Switch?

Finish Nailer Repair - Replacing the Driver Guide (Ridgid Part # 79004001022)
Power switch assemblies and carbon brushes are two of the most commonly-replaced power tool parts. Because both brush and power switch failures are common--and because both breakdowns present similar symptoms--diagnosing between them when symptoms present can be tricky. 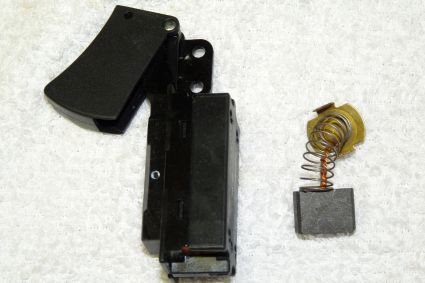 For a full "Diagnosing Electric Power Tools" article-Click here. We address the issues of carbon brush and power switch breakdowns separately because they are very common part replacements, and because it can be especially difficult to tell which one is the cause of the malfunction.

The steps and descriptions below will help to quickly pin down the cause of the malfunction. Fortunately, carbon brush replacements and power switch replacements are two of the easiest tool repairs. Tool and machine users everywhere can save themselves some extra cash and valuable time when they know what to look for and how to set it fix it on their own.   Similar Symptoms Beginning symptoms of wear or malfunction can look the same for both carbon brushes and power switches. When they first start to go out, switches and carbon brushes can present either (or both) of the following two symptoms :

Wearing power switches will cause off-and-on use as their connections wear down, sometimes requiring several pulls of the trigger before the tool starts up.

Wearing or damaged brushes can cause a similar off-and-on use problem, but this is usually because wear, damage, or a "burr" formation is preventing the carbon brush from correctly contacting the armature's commutator.

This makes diagnosis difficult at first, but a switch acting like this will quickly get worse by reducing the power performance of the tool even more, making it easier to pin down the cause as time goes on. Switches can also cause a decrease of tool power when they have suffered heat damage but not shorted out completely.

It might be hard to tell whether it's a brush or a switch if these are the only two symptoms presenting. If that's the case, the best thing to do is to take a look at the parts themselves by opening the tool up. Start with the carbon brushes since they're usually more accessible, and then--if the brushes check out--take a look at the switch. [Back to top]
Power Switch Symptoms Power switch symptoms have two major differences from carbon brush symptoms:

1. Tends to Run Fine After Starting


Although decreased power can be caused by a bad power switch, it is a more uncommon symptom.

Bad switches more commonly tend to have a hard time starting up, but then will run smoothly and at full power once the connection is made.

Brush symptoms tent to cause more symptoms during operation, not just start-up.


Wearing and damaged switches will cause increased off-and-on use as they are used until they eventually don't start up at all.

As carbon brushes worsen, the symptoms that worsen with them tend to be during operation. [Back to top]   Carbon Brush Symptoms There are four major telltale signs that brushes are going bad instead of a switch:

1. Off-and-On Use During Operation

Several brush problems can cause a power tool to turn off and on during operation as the brushes connect and fail to connect with the armature.

Faulty power switches normally will not cause off-and-on use during operation.

2. Shaking or Slapping the Tool Helps

Ever had a tool start up after a shake or good smack? This often means it's a carbon brush that's causing the problem, although it can also be a bad armature.

Brushes can get caught up in their holders, form burrs, and experience other complications that prevent them from continuously contacting the armature like they're supposed to do. Shaking or gently striking the tool can sometimes jostle the brushes back into the correct position, making it possible for the tool to complete a circuit.

Shaking and slapping will not have an effect for power switch issues.

If there's a banging sound inside the tool's motor when it runs, then it's probably a brush. It could also be a bad armature, but if that is the case then it's most likely that the brushes will have to be replaced anyway. The banging sound is caused by either a damaged or misshapen brush, or a misshapen armature. As the armature spins, either kind of damage will make the brushes bounce off of the commutator.

Power switch failure will not cause a banging sound in the tool's motor.

All that brush bouncing on the armature will often kick up some sparks out the dust vents as the electricity arcs to stretch over the gaps of damaged areas. Eventually, if brushes are not replaced, they can continue to damage an armature and cause overheating or smoke.

Sparks and smoke out the vents will not be caused by power switches.   It's very important to check carbon brushes often and replace them quickly when they present problems, as damaged or worn brushes can do serious damage to more sensitive (and expensive) parts of a power tool, like the armature. Frequent brush checks should be pretty easy since most of them are easy to get to just by undoing a couple screws. [Back to top]   What to Do Whether it's a brush issue or a switch issue, diagnosis should end with a visual inspection of the parts.

1. Take a look at the switch assembly and check for damage.

Heat damage will appear as melted or discolored wiring, or melted plastic. Below is just one example of switch heat damage: 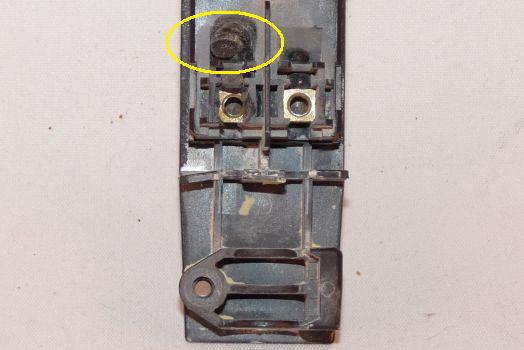 Power switches often wear out with use and just have to be replaced sometimes before they can be eliminated as the cause of a tool not starting. Power switch failure is the most common reason for a tool not to start at all. The best way to be sure about a power switch if there is no visible damage is to use a multitester. For a "Multitesters 101" article-Click here. For a "Power Switch Repair 101" article-Click here.

Heavy wearing will be close to or past the brush's wear lines. Heat damage will appear as dark areas on the brushes or discoloration of the wires/springs around the brushes. Chips will be clearly visible. Burrs will be small formations around the brush's sides or edges which can restrict a brush's movement in its holders and prevent it from contacting the commutator. Check that the brush springs are still "springy" and applying enough pressure. 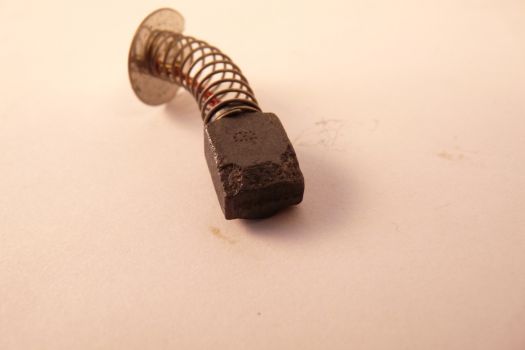 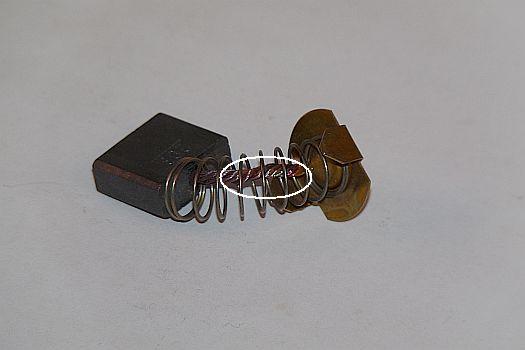 Chips, heavy wear, and burrs are the major causes of carbon brush problems Burrs should be filed down, but brushes should be replaced in all other cases. It is especially important to continue along the power path and check the armature's commutator for damage if chips are found in brushes. Chipped brushes are often cause by worn or damaged commutators, so replacing damaged brushes with new ones won't be a lasting fix if the commutator is also damaged. [Back to top]   Conclusion This guide should help make diagnosing between power switch and carbon brush symptoms easy. It is important to note that brush issues and switch issues can appear at the same time with overlapping symptoms. This is why it's important to completely inspect the inside of the tool, appliance, or machine.
Please browse our "How-To" articles and other articles for more information about diagnosis and parts replacement. eReplacementParts.com's tool and machine repair forum, discussion boards, and customer service center are also available to our customers as information tools. Feel free to browse our website's features or give us a call for any tool and machine question. If it looks like your power tool's brush or switch is acting up, begin your parts search by typing in the tool's model number in the search field at the top of this page. You can also search by clicking this link to  Tool and Equipment Categories. Good luck on your repairs!
[Back to top] What we're about.