2. Remove the fasteners on the sides of the impeller.

3. Remove the metal spacers from the center.

4. Install the spacers on the new paddles.

5. Install the new paddles on the center plate.

6. Reinstall the fasteners to the sides of the paddles. Steps to Replace a Toro Snowblower Scraper

2. Pull the old scraper off of the snowblower.

3. Press the new scraper onto the lip of the impeller .

4. Return the scraper's bolts and nuts to their positions. 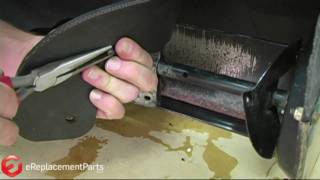 If a snowblower isn't throwing snow as far as it used to, that means it's time to replace the impellers (paddles).
You can tell that a snowblower has a worn scraper because it will no longer clear the sidewalk as well as it did before wearing.
Also, paddles and scrapers are designed to wear at approximately the same rate, so it's always a good idea to replace them both at the same time. Snowblower paddles also have wear indicators on them that make it easy to keep an eye on their progress.

The impeller paddle pictured above is just about worn to the hole that indicates it's time to be replaced.
Both of these Toro snowblower parts are easy to replace, only require simple tools, and you can save a pile of money by handling the repairs at home.  Below, we explain step-by-step instructions to change the paddle and scraper on a Toro single stage snowblower.   Steps to Replace a Toro Snowblower Paddle
Most Toro single stage snowblowers have very similar designs, so these steps will apply to nearly every Toro single stage machine.
1. Remove the center hex bolts.


There are four hex-nut combinations holding the paddles to the center plate.

The center bolts and nuts can be easily removed with a wrench.

[Back to top]
2. Remove the special fasteners on the sides of the impeller paddles.

Each paddle has two special fasteners and nuts on each of its sides that hold the paddles to the snowblower.

These fasteners are a little trickier to remove than the center bolts, mostly because the only space to access them is narrow.

The best way to get at the fasteners is using a screwdriver and a small wrench at the same time. Again, the space is very narrow, so it can take a little bit of work to loosen them up.

The nuts will most likely drop off of the fasteners, leaving the bolts in the paddles.

After the nuts are removed from the fasteners on both sides, it may be necessary to pull the fasteners out of the paddles with a pair of needle nose pliers. [Back to top]


3. Remove the metal spacers from the center paddle holes.

There are two metal spacers in the center bolt holes of each paddle.

Remove the metal spacers with a flat head screwdriver.

The metal spacers must be reused on the new impeller paddles, so it is important to remove them carefully.

[Back to top]
4. Install the spacers on the new paddles.

Now that the old, worn paddles are removed from the snowblower, it's time to get the new paddles ready for installation.

To find a replacement paddle for your Toro snowblower, visit our Toro Snowblower Parts page or type the model number of your snowblower in the search field at the top of this page.

Press the metal spacers into the the center bolt holes of the replacement paddles.

Start by hand, then use the back of a screwdriver or rubber mallet to tap them in the rest of the way. [Back to top]
5. Install the new paddles on the center plate.

The new paddles are ready to go now that the metal spacers are in.


Secure the new paddles to the center impeller plate with the hex bolts and nuts removed previously.

Installing the paddles on the center plate first helps them stay in place while installing the more difficult side fasteners. [Back to top]
6. Reinstall the special fasteners to the sides of the paddles.


Because of the limited space on the sides of the paddles, again, this part of the repair can be tricky.

The best way to start is to first position the side fasteners in the new paddlse.

It may be necessary to start them by hand and then follow up by pulling them through the other side with a pair of needle nose pliers.

Just be careful not to damage the threads on the fasteners.

With the fasteners in position, they can then be threaded through the holes on the side impeller plates.

Next, the nuts must be threaded on the fasteners while they are still in position through the plate holes.

To get the nuts on the fasteners through that narrow space, try holding a nut firmly in a pair of needle nose pliers. Then, position the nut over the end of the fastener while turning the fastener with a screwdriver.

After the nuts are started, they can be tightened on the rest of the way much more easily with a small wrench. [Back to top]
Steps to Replace a Toro Snowblower Scraper We list the steps to replace a snowblower scraper separately from the paddle steps just for the sake of clarity. In reality, a replacement snowblower scraper is best installed at the same time as the paddles. Scraper and paddle replacements should be performed together for two reasons:

1. Scrapers and impeller paddles are designed to wear at about the same rate, and, therefore, they tend to require replacement at the same time.

2. The scraper area is easier to access while the old impeller is out of the way.

There are three hex bolts and nuts holding the scraper onto the lip of the impeller area.

Remove the nuts with a wrench.

It may be necessary to pry the bolts out of the scraper with a flat head screwdriver.

[Back to top]
2. Pull the old scraper off of the snowblower.

The old scraper should pull right out of the machine now that the bolts are removed.

A metal tab helps to hold the scraper to the lip, so it may require a little lift while being pulled off.

3. Press the new scraper onto the lip of the impeller opening.

Remember that the scraper is held onto the lip with the help of a metal tab.

When you install the scraper, make sure you start with the side that has the tab.

The scraper will press on the rest of the way easily. Make sure to line up the bolt holes for the next step.   4. Return the scraper's bolts and nuts to their positions.

The last step to install the scraper is to reinstall the scraper bolts and nuts with a wrench. Make sure to tighten them down all the way. [Back to top]   Conclusion If you just followed this article's repair steps to replace the paddle and scraper on your Toro single stage snowblower, then you can be proud and assured that your machine will run great for several seasons. The only other major parts that might need replacing on your single stage snowblower any time soon are engine parts, like snowblower spark plugs and filters. Visit our Toro Snowblower Parts page to find a matching replacement paddle and scraper for your single stage Toro snowblower, or, simply enter your snowblower's series number in the search field at the top of this page. You can even pick up spark plugs for your snowblower's next tune-up, or any other Toro replacement parts that you might need.   [Back to top]
What we're about.